ProSweets delivers a host of systems and equipment solutions

This year’s ProSweets in Cologne delivered a number of key sector launches from around the world, and proved one of the last major events in the sector before the coronavirus forced cancellation of a number of global trade shows. Neill Barston reported on the key in event in Germany

Confectionery Production returned once again as the only UK magazine exhibiting at the show, which attracted a total of 18,000 visitors from over 100 countries.

While concerns over Coronavirus and its close proximity to Interpack in May meant that attendances were down on previous years, organisers still believed the show had proved a success. Confectionery Production returned as an exhibitor at the event, and you can catch our video review of proceedings to find out more.

Among the core themes for the show were topics of delivering greater equipment efficiency and productivity in enabling companies to meet sustainability goals for efficient manufacturing operations.

“The trade fair impressed with future-oriented themes such as sustainable packing, resource-saving production, flexible machines and natural ingredients. Not least the unique combination with ISM in the direct vicinity offers high added value for the industry – because this is the only place where the entire value chain of the sweets and snacks industry is covered completely,” explained Gerald Böse, president and chief executive officer of Koelnmesse of the event, which attracted 260 exhibitors.

According to the trade visitor survey, the share of decision-makers hailing from a management background and production departments lay at over 80 per cent, enabling top level discussions to be held at the event.

As organisers noted, within the Ingredients section, natural ingredients and reformulation solutions still play a major role, though the issue was not as prominent as some market observers may have anticipated.

Other key trends included the development of flexible machines that can be adapted to changed recipes and demands as a result of their fast set-up options were also under focus.

On sustainability, resource-saving solutions made of paper and recyclable raw materials were presented including the winning product of the ISM Packaging Award powered by ProSweets Cologne – “Labels made of grass paper” by Froben Druck from Germany.

The trade visitors’ interest in this theme section was also high, and exhibitors reported strong leads for equipment sales in a number of instances across the event. Another highlight for the event was the future congress #CONNECT2030 – The Future Summit for Sweets and Snacks, being staged for the first time.

This featured a keynote presentation from Dr Ulf Merbold, a German former astronaut, who recalled his time with the space programme, recalling that even off world, there was a need for snacks, though they were in short supply.

The supplier industry particularly plays a major role regarding the future themes of the industry, because it already pursues numerous innovative approaches and offers solutions that provide the manufacturers with a decisive advantage in the international competition.

The announcement by ProSweets Cologne that it intends to reinforce the ingredients section in the coming year, met with great interest among the exhibitors. In this way, the section will in future serve more as a source of inspiration for new concepts and product ideas for the development of alternative products and product variants. This will encompass raw materials, ingredients as well as semi-finished products.

Among ingredients businesses reporting a strong event was Paradise Fruits by Jahncke, which released its latest series for confectionery at the event.

Speaking to Confectionery Production, Richard Horsley commented that the new line of crunchy freeze dried granulates aimed at confectionery and bakery sectors, had been well-received.

The series has been developed through a specially adapted process that allows customers the option of a one component recipe with 100 per cent fruit, or a combination with yoghurt or additional carriers.

He said: “Having ISM and Prosweets alongside each other has been great for us and our latest range has been well received here, and we have focused on tastes and textures which are in trend for the confectionery, offering solutions that include concentrates and granulates that have been designed for a number of products including biscuits under the theme of taste of the East, which have been inspired by Japan. The series includes items such as green tea granulates, and other flavours such as lime and lychee.”

The sales manager added that its freeze dried range of fruits had also made a notable impact at the event, along with its 40% reduced sugar, high fibre recipes, which has responded to consumer demand for healthier options.

As Ann-Christin Meier, of fellow ingredients group Capol explained, the business has continued to enjoy an upward trend as it marks its 45th anniversary, which formed a key part of its display at this year’s show.

She explained there had been a broad level of interest in its applications, which span across glazing, sealing, polishing and anti-sticking agents for finished product confectionery.

The company has also devise solutions for chocolate coated centre, with a series of compound coasting that have been designed to deliver a high quality finish to ranges of sweets.

Meanwhile, Maartje Hendrickx, of Netherlands-based colouring food group GNT, explained that its latest campaign built around the shade of aqua had gained a positive response to those calling on its stand, which featured its established Exberry series that has continued to play a significant role in within the confectionery market.

She said: “So far, the latest campaign has gone really well – it’s not just journalists picking up on it, but food producers, some of whom say to us they have never really thought about shades of aqua, though it’s of course not the only colour we are talking about.

“But this latest colouring shade has been good as it has enabled us to discuss for example what can be done with spirulina algae.”

Machinery focus
In terms of equipment, Edward Smagarinksy, of Australian-based equipment manufacturer tna, said there had been a broad spread of visitors this year, particularly from across Europe and Russia. 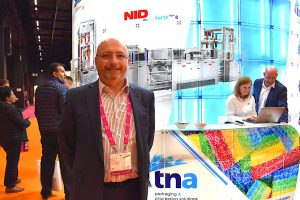 “This year’s ProSweets is a little unusual in that it’s held in an Interpack year, so we have found that a lot of companies are not actually here. However, we are pleasantly surprised at the number of new contacts that turned up – that’s why you go to exhibitions like this, so we’ve had very good exposure here. We have had three busy days, perhaps that is down to us being the only Mogul supplier here,” revealed
the sales manager, who explained the company had also had a good level of interest in its conveying equipment.

He said: “The show has gone well for us this year and we have had more visitors than previous editions – which is perhaps down to the fact some of our competitors are not here.

“Our focus for this year is our BTB25 packaging machine that we have developed for artisan manufacturers. It’s a very versatile and reliable line that is easy to change format sizes, which enables companies to wrap bars with their own brand identity, so this has been aimed at the premium market segment.”

Meanwhile, Stuart Grogan, operations director for UK-based BCH, described the trade fair as having been “phenomenal” for the business.

He noted that being staged alongside ISM had allowed his team to hold a number of key discussions with sweets businesses at the Cologne show.

“Our focus this year is to grow our offering in the fruit-snack industry, as year-on-year we are seeing continued growth in that area, so we are working on new processes and formulas. It seems that this year, there’s been a big upturn in vegan and healthy eating trends,” explained Grogan.

For its part, Belgian-based equipment business Hacos also reported a notable level of interest in its present range of equipment spanning moulding and depositing lines for the confectionery sector.

Speaking to Confectionery Production, marketing manager Raf Tuytelaars (below) explained that this year’s show had proved as productive as previous years, with the company making use of video displays in order to showcase the full extent of its series.

“I’d say this has been a magnificent show for us this year, and we always feel that it’s worth us being here even in a year that Interpack is planned. We can’t obviously have the whole range with us, but the videos we’ve shown have been a good means of showing customers what can be done with our equipment.  Among our key focuses this year were our semi-automatic moulding lines, as well as accompanying depositing systems.”

Packaging specialists Ulma, also recorded brisk business at the trade fair, noting that there had been a number of new customers that the company had acquired during the trade fair.

Commercial director Jesus Mari del Rio said: “We have found some potential customers from being here – we have focusing on two specific packaging lines and we found that around 70% of visitors who are new to our business, so we are confident that we will be able to gain some orders from the show.

“We are making investments across bakery, confectionery and snacks markets, so this show alongside IBA is part of our trade show strategy, and we are continuing to grow as a business.”

For its part, Baker Perkins also reported a notable performance for the 2020 event, with its stand displaying new equipment series, and offering key demonstrations that drew in visitors.

“But what has generated a lot interest and driven people’s imagination is Rousselot demonstrations that we have been depositing gelatin into silicon and metal moulds, as well as blister packs, proving to people the setting capabilities within 15 minutes of depositing.

Preparations for the 2022 edition of Choco Tec event gather momentum

The heart of sweets and snacks in the Middle East.